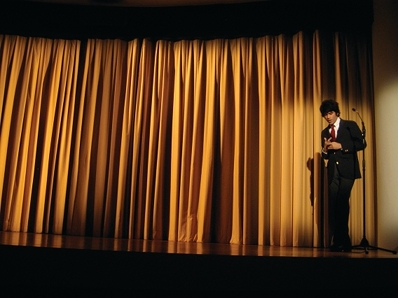 Soft Focus is an original internet television series on VBS.TV in which punk and soul musician and writer of fine cultural criticism Ian Svenonius interviews, candidly and intimately, the most dynamic musical performers of this—or any other—era. Soft Focus season 1 was taped at the Guggenheim Museum in New York City and featured chats with such luminaries as Chan Marshall, Will Oldham, Ian Mackaye and Henry Rollins. Soft Focus season 2 took us to the United Kingdom, where Ian parried with the likes of Mark E. Smith, Shaun Ryder, Kevin Shields, and Billy Childish. The recently aired third season of Soft Focus was an American road trip that took us to five cities with guests including Ad-Rock, Stephen Malkmus, Mike Watt and the Sun City Girls.

Soft Focus appeared at ATP New York 2009 where Ian spoke to Martin and Alan of Suicide, Buzz of the Melvins, and Jon Spencer. Check some of that out here.

Now Ian brings Soft Focus to ATP UK, and as the proverbial icing on the chat-show cake, Ian Svenonius will be DJing a dance party on Friday night. Too much fun!

Check out some past interviews:

Kevin takes us through the technical minutia behind MBV’s crazy bendy dream-sound.

Mike Watt isn’t sure if you’re the right person to start a band.

Henry Rollins and Ian Svenonius have an hour's worth of witty repartee, touching at first on government surveillance, Henry’s appearance on Australia’s terrorism watch list, the USO tour, self-immolation aspect of rock music, the life-changing experience of catching a Led Zeppelin show with Ian MacKaye, and his grievances with people who think music has stopped progressing.