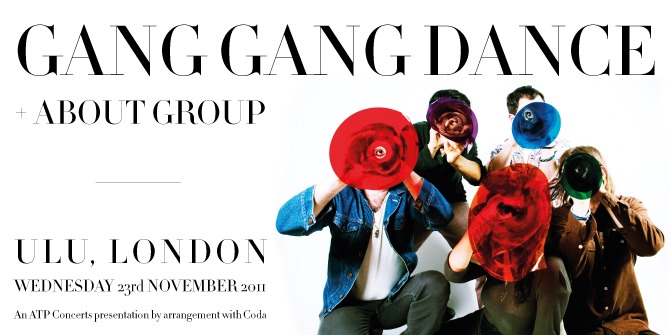 Gang Gang Dance and About Group play London's ULU this Wednesday, and we can now confirm the stage times. DJ Jagger (Supreme) deejays between the bands. Tickets are available in advance from the link below...

Congrats to Luke Ede on Facebook and Joel Friskney-Adams on Twitter who both win the Gang Gang/About Group albums from our comp last week...

About Group play London's ULU on the 23rd November supporting Gang Gang Dance. Tickets are on sale now. About Group are...

The fantastic Gang Gang Dance who released one of 2011's best albums earlier this year in Eye Contact and have also become known as one of the most unmissable live bands around have just announced a new London headline show at ULU this November. Support comes from About Group (feat members of Hot Chip, This Heat). Tickets are on sale now, full info below...