El-P, The Music Of Can & more added to I'll Be Your Mirror Festival, 25-27 May at London's Alexandra Palace 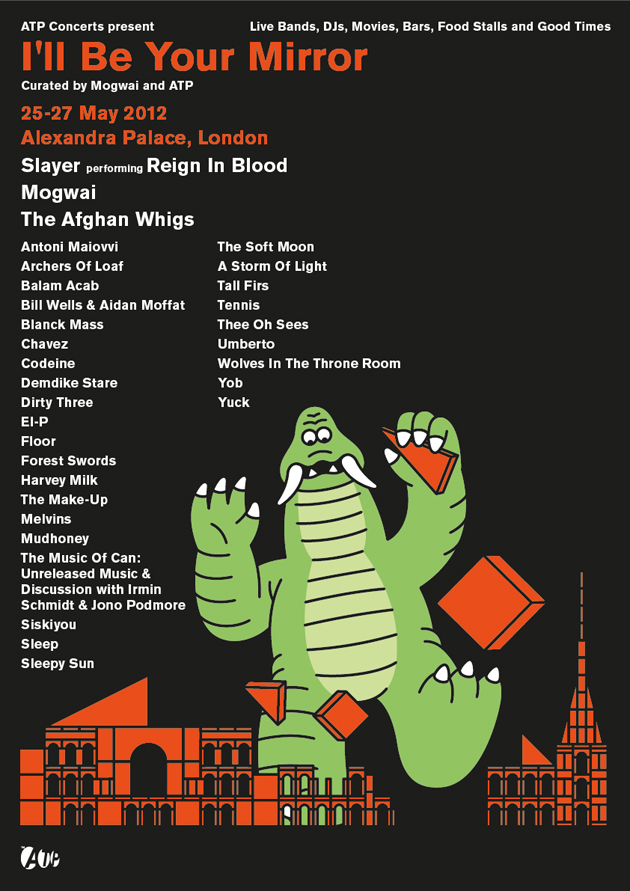 El-P and The Music Of Can Lead Final Set Of Additions For
I'll Be Your Mirror, 25-27 May at London's Alexandra Palace
headlined by SLAYER performing Reign In Blood, MOGWAI & THE AFGHAN WHIGS

Day Tickets on sale now via This Link at £39 for Friday, £59 for Saturday/Sunday

ATP can now announce the final group of additions for the event...

On Friday 25th May the incomparable Slayer present their classic Reign In Blood LP live in it's entirety during their headline set in the Great Hall to celebrate it's 25th anniversary. This will be their only UK show of 2012. They're joined by a diverse bill of heavy music highlighted by the legendary Sleep and Melvins, black metal heroes Wolves In The Throne Room, Oregon doom metallers Yob and Death Grips - one of the most acclaimed new hip hop acts of the last year and an amazing live act. We can now announce our final musical addition for the Friday as apocalyptic metal troupe A STORM OF LIGHT.

On Saturday 26th May post-rock legends Mogwai will headline in the West Hall and curate the rest of the day's line-up - this will be their only show in England in 2012. They will be joined by their previously announced choices of Mudhoney, reformed slow-core group Codeine, the amazing Dirty Three, cult alt rock band Chavez, Floor (feat. members of Torche), Balam Acab, noise rock group Harvey Milk, the fantastic Bill Wells & Aidan Moffat who released an amazing LP in 2011, San Francisco's post-punk influenced The Soft Moon and Berlin based composer/DJ Antoni Maiovvi. We can also now confirm a rather special event for the Saturday; THE MUSIC OF CAN: Unreleased Music & Discussion with Irmin Schmidt + Jono Podmore. When the legendary Can studio in Weilerswist was sold to the German Rock N Pop Museum, they bought everything, including the army mattresses that covered the walls for sound protection, and relocated it to Gronau. Whilst dismantling the studio, master tapes were found and stored in the Spoon archive. With barely legible labeling, no one was sure what was on these until Can founder Irmin Schmidt and long time collaborator Jono Podmore started to go through over 30 hours of music. What they found was years of archived material, not outtakes, but rather tracks which had been shelved for a variety of reasons – soundtracks to films that were never released and tracks that didn’t make it onto the final versions of albums due to space. The final cut of tracks, dating from 1968-1977, features studio material recorded at Schloss Nörvenich and Can Studio, Weilerswist with the Can line up of Holger Czukay on bass, Michael Karoli on guitars, Jaki Liebezeit o n drums and Irmin Schmidt on keyboards, and on most tracks, vocals from Malcolm Mooney or Damo Suzuki. On 18th June, Mute will release a 3CD Box set of the tapes, and as a preview, at I'll Be Your Mirror Irmin Schmidt and Jono Podmore will present some of these tracks (accompanied by visuals and discussion). Our final addition for the Saturday is UMBERTO, much loved for their stunning giallo influence horror instrumentals.

ATP will soon also confirm DJs, Cinema and Stage Times for the event.

Here is the current musical run-down of the line-up...

Across the weekend ATP are bringing to the venue a cinema, food vendors, adding extra bars and toilets. Friday runs from 4pm-1am. On Saturday and Sunday doors will open at midday, with the event finishing at midnight. Headliners will finish by 11pm on all nights. For a constant stream of music, interviews, videos and more from artists playing the event, make sure to follow the I'll Be Your Mirror London 2012 Tumblr blog!.