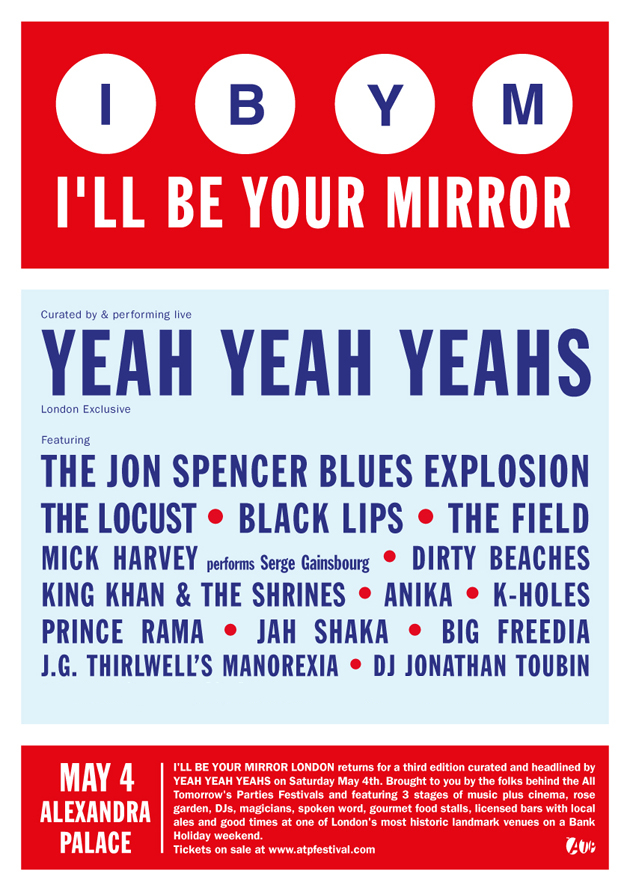 On Saturday 4th May 2013 at Alexandra Palace, London, All Tomorrow's Parties will present the third UK I'll Be Your Mirror event.

Tickets Available On The Door - £60 cash

Saturday 4th May sees the long awaited return of New York's mighty Yeah Yeah Yeahs, who will play their first London headline show in four years. The band will be personally handpicking the line-up for their day...

ATP are bringing to the venue a cinema, DJs, excellent food vendors, adding extra bars (including cash bars) and toilets.  I’ll Be Your Mirror continues to add to Alexandra Palace’s list of historical moments, in what promises to be another unparalleled day  of the best music, art and film in the Capital.

Under 16s must be accompanied by an adult, under 5s are admitted free. Under 10s must be out of the venue by 8pm. Please make sure young children use ear protection! Doors will open at 12 noon on each day, with the event finishing at 1am each night. Yeah Yeah Yeahs will finish by 11pm.

Tickets Available On The Door - £60 cash

All Tomorrow's Parties has been promoting festivals and concerts throughout the world for more than 10 years. It was founded in the wake of Belle and Sebastian’s Bowlie Weekender, with Mogwai curating in the unusual setting of Pontins Holiday Camp, Camber Sands. Since then the festival has appeared every year and has expanded across the globe continuing to set itself apart from large scale corporate festivals by staying intimate and fan-friendly. The line-ups are chosen by significant bands or artists which results in eclectic events that combine performances by legendary and influential acts with appearances by the latest crop of experimental artists from any (and every) musical genre. The festival has become more successful with every passing year, and ATP events have taken place in the UK, USA, Europe and Australia, with past curators including Simpsons creator Matt Groening, Nick Cave & The Bad Seeds, Mike Patton, My Bloody Valentine, Portishead, Sonic Youth, Slint, and Tortoise. In 2011 ATP launched a new series of curated city-based events called I'll Be Your Mirror, which have so far taken place in London, Tokyo, New York, Asbury Park, with the festival debuting this February in Melbourne.