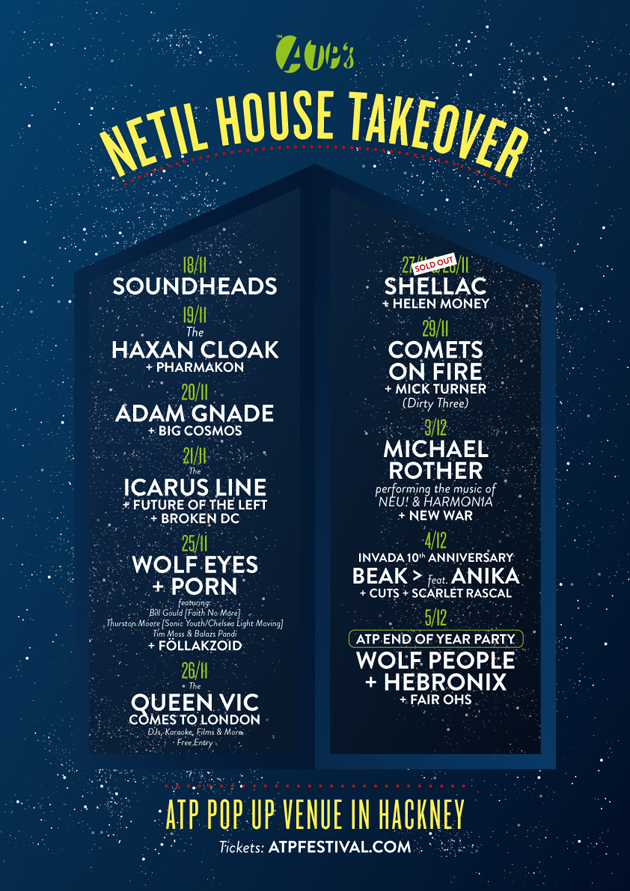 In the run-up to 2013's end of year festive period, when the world famous All Tomorrow's Parties will present two final holiday camp events under the title 'The End Of An Era', the organisation will also be launching a very special popup venue at Netil House, London.

ATP's takeover event will be running on weeknights between Monday 18th November, when the mysterious Soundheads kick things off, and Thursday 5th December when Wolf People headline a special ATP End Of Year Party.

The series features an electric range of music: from newly acclaimed experimental artists like Pharmakon and The Haxan Cloak, to renowned live acts such as The Icarus Line and the legendary Shellac, a rare performance from the reformed Comets On Fire and perhaps the most legendary artist of this series: Michael Rother performing the works of his seminal Krautrock bands Neu! and Harmonia.

Tickets range from £10-£20 and capacity is limited to less than 600 people per night, with each event starting from 6.30pm and featuring food vendors, film screenings, DJs, and other activities like whiskey tastings - see our website for updates closer to the time.

FROM ATP is a series of films by Vincent Moon, shot over 7 different All Tomorrow's Parties music festivals. All between 25 and 35min long, they try to encapsulate the gonzo energy of the festival, mixing cult live shows with late night home parties, drunk dancing with hyperactive filming, following each time the voice of a narrator to whom it was asked - where is music coming from? From Lydia Lunch to Damo Suzuki, from Dave Dirty Projectors to Josh T. Pearson, a sonic gallery of our forgivable excesses.  The films were funded through Kickstarter and ATP are very pleased to be able to screen some of the completed films at our Netil House shows. More details on which films will show each night to be confirmed closer to the time.

We have invited the street traders from Netil Market to come along to each of the events so expect the likes of BAO (Winner of the 2013 Young British Foodie's Street Food award), Breddo's Tacos, Fin & Flounder and The Cooking Cooks to be serving up delicious food in the earlier part of each evening. Keep an eye on our website for who will be serving at which show.

All shows are on sale now. Here is the complete rundown, with more supporting artists to be confirmed in the weeks ahead.