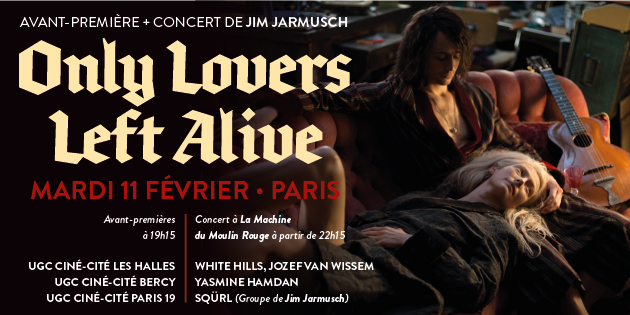 Following the sold-out success of December's Cologne & Berlin events, and our already announced London event for February 6th; ATP and Cinema Paradiso are proud to be staging a 2nd event for 2014 in Paris on February 11th to launch the new Jim Jarmusch film 'Only Lovers Left Alive', starring Tilda Swinton and Tom Hiddleston (view trailer).

This will take place with 3 simultaneous screenings of the film at UGC Cinemas Les Halles, Bercy, & Paris 19, followed by a live concert at La Machine du Moulin Rouge, where musicians from the soundtrack White Hills, Jozef Van Wissem, Yasmine Hamdan, and Jim Jarmusch's band SQÜRL - will all play live.

We can also announce today that Warren Ellis of Nick Cave & The Bad Seeds & Dirty Three will be DJing at this Paris event, and Spencer Hickman of the Death Waltz Recording Company will be DJing at our earlier London event on February 6th.

Paris tickets are priced at €25 +bf, include entry to both the Film Screening & Live Concert, and are on sale now direct in person (not available online) from either Les Halles, Bercy, or Paris 19 cinemas.

This is a special advance screening of the film ahead of general release, so tickets are expected to go fast. It is also the first time writer/director Jim Jarmusch’s band SQÜRL has ever performed in the country.

Following the screening; customers are welcomed into the live venue where they will have a chance to walk amongst lovingly recreated sets from the film, while enjoying an evening of live music from the very artists they just heard and saw immediately before in the fantasy environment of the movie theatre.

These events will take the customer from the world of the film in two dimensions in front of them on the screen, and transport them direct into the sights, sounds, and smells of it in three dimensions all around them.