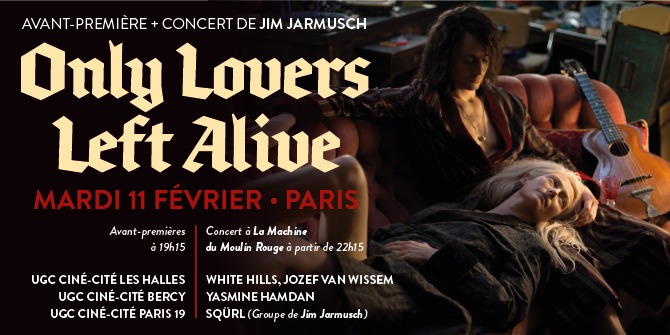 The Taste Of Blood

The original soundtrack to Jim Jarmusch’s crypto-vampire love story 'Only Lovers Left Alive' is officially released today in the UK and Europe on vinyl and CD through ATP Recordings!

Ahead of February's 'Only Lovers Left Alive' dates in London and Paris, we invite you to have a look back at December's sold out German events through a new video clip, to get a feel of the excitement and atmosphere that surrounded these much talked about preview screenings & live concerts

Tickets for Only Lovers Left Alive in Paris on February 11th now available to buy online.

We are pleased to announce that the second of our 2014 'Only Lovers Left Alive' events will be held in Paris on Tuesday the 11th of February. This will take place as a preview screening of the film followed by a concert at La Machine featuring artists from the soundtrack White Hills, Jozef Van Wissem, Yasmine Hamdan and Jim Jarmusch's own band SQÜRL.