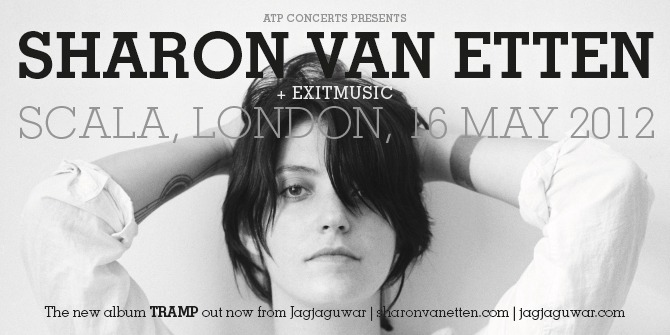 Sharon Van Etten's London show this month is sold out, but we can now confirm her return later in the year when she will play Shepherds Bush empire. Tickets are on sale now...

We've put 10 more tickets up on sale for Sharon Van Etten at London Scala - these are the last ones and then it's sold out...

Exitmusic to support Sharon Van Etten in London this May

New Secretly Canadian artists Exitmusic (recently profiled on The Guardian) are confirmed to support Sharon Van Etten at her London Scala show next month. Most of the tickets for this show are gone and we may not have any left on the night so book in advance to guarantee entry...

Having recently released the fantastic Tramp album to much deserved acclaim, and with her upcoming London Cargo show long sold out, we're happy to now be able to announce a new London date from Sharon Van Etten at the Scala this May. Tickets are on sale now, here are the details...