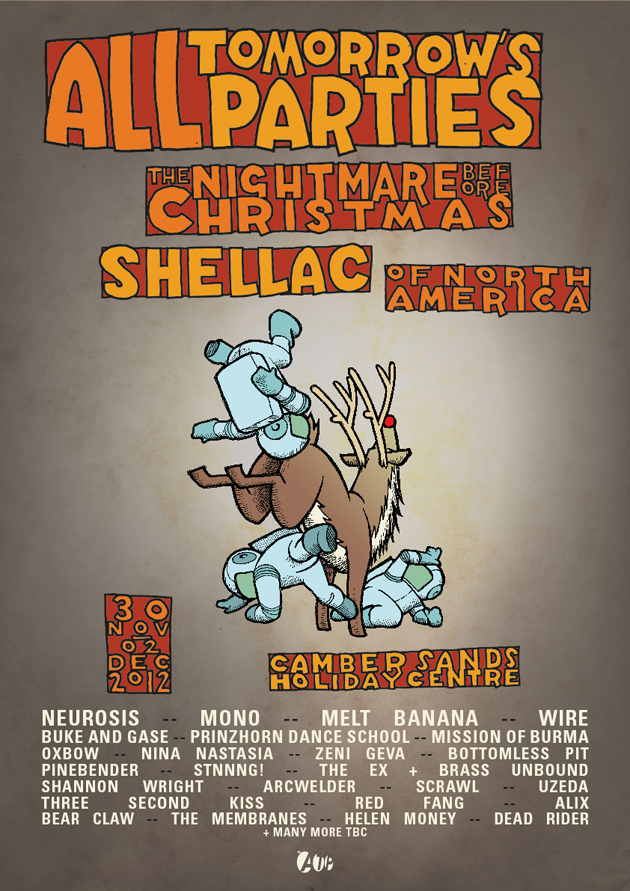 Remaining Tickets On Sale Now via This Link

To celebrate a return to the festival's original home of Pontins Camber Sands Holiday Camp; All Tomorrow's Parties recently announced a Nightmare Before Christmas festival event curated by SHELLAC OF NORTH AMERICA to help celebrate their 20th anniversary as a band. ATP will return to the festival's spiritual birthplace where Shellac headline & curate the 35 band bill playing across the event on the venue's excellent indoor stages featuring award winning sound, with DJs until late, Cinema and much more.

Only a limited amount of Four and Six Berth Apartments are still available at this point. The second group of fantastic artists for the event are announced today.

Steve Albini of Shellac: "The members of Shellac are inviting more of our favorite bands to ATP. Some, like Melt Banana and Uzeda, are old friends and comrades. Some, like Neurosis, Prinzhorn Dance School and Buke and Gase, are bands we've admired as fans, but all of them are bands we love and recommend to everyone."

who join the previously announced line-up of...

All tickets include accommodation in private apartments for you and your friends.

Need to find people to share an apartment with, or want to find a space in someone's apartment? Check out the community at Facebook.com/AllTomorrowsPeople. 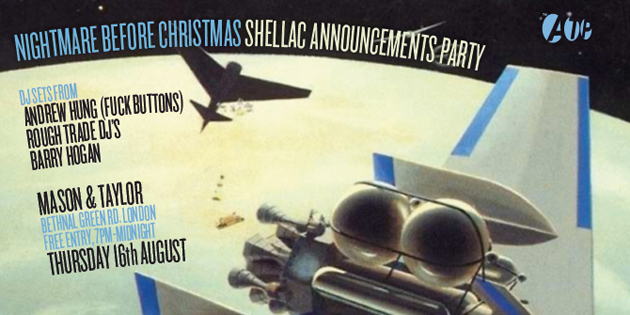 - ATP will be hosting a Shellac themed night from 7pm tonight (Thursday 16th August) at Mason & Taylor, Bethnal Green Road, London. It promises DJ sets from Andrew Hung (Fuck Buttons), Rough Trade DJs, ATP's Barry Hogan and others; they'll be playing music from the bands performing at the festival and much more. Entry is free (no need to book in advance, just come along on the night). This is a chance for ATP attendees to get together and more importantly if you are looking to find enough people to buy one of the few remaining apartments, come along, give us your details and we'll try to pair you with some other possible ATP attendees. To celebrate Shellac's preference for Vinyl, we're also asking attendees to bring in their old singles and LPs on vinyl, which they'll be able to trade with others and pick up something new. To reflect Steve Albini of Shellac's quote that "There are three things in the world that I endorse: Abbey Road, Nutter Butter Sandwich Cookies, and All Tomorrow's Parties" we'll also be offering free Nutter Butter Cookies to early attendees, and we've also got a small amount of Shellac mix CDs hailing back to their 2002 ATP event to give away to early arrivals. You can find the venue at 51-55 Bethnal Green Road E1 -

ABOUT THE VENUE / MORE INFO:

The event takes place at Pontins Holiday Camp, East Sussex over three days from, Friday 7th - Sunday 9th December 2012. Check in begins on Friday at midday/noon and Check out occurs on Monday morning at 10am sharp. The event is held in a holiday resort so all tickets include a pass to the festival + 3 nights accommodation in private apartments. Each chalet is self-catering and has a small kitchen with cooking/dining utensils included, bathroom with either a shower or bath and of course a sink & toilet. The TV area doubles as a bedroom with a roll out sofa bed, and then there will either be one or two bedrooms with the relevant numbers of beds. Bedding is included in the chalets.

So you basically stay on site in your own private accommodation with your friends for 3 nights and you ALSO get a pass to see all of the bands perform over 3 days, plus bar with DJs until early in the morning, free cinema programme, use of site facilities and much more! Apart from nursing a   hangover, there is a swimming pool, go-karts which are both free of charge, arcades, a beautiful beach across the road, the local pubs and of course Rye Village where there are some very nice places to eat. Camber Sands is easily accessible via train to Rye (followed by a short bus/taxi ride).

All Tomorrow's Parties has been promoting festivals and concerts throughout the world for the last twelve years. It was founded in the wake of Belle and Sebastian’s Bowlie Weekender, with Mogwai curating in the unusual setting of Pontins Holiday Camp, Camber Sands. Since then the festival has appeared every year and has expanded across the globe continuing to set itself apart from large scale corporate festivals by staying intimate and fan-friendly. The line-ups are chosen by significant bands or artists which results in eclectic events that combine performances by legendary and influential acts with appearances by the latest crop of experimental artists from any (and every) musical genre. The festival has become more successful with every passing year, and ATP events have taken place in the UK, USA, Europe and Australia, with past curators including Nick Cave & The Bad Seeds, Mike Patton, My Bloody Valentine, Portishead, Sonic Youth, Slint, and Tortoise. In 2011 ATP launched a new series of curated city-based events called I'll Be Your Mirror, with events so far taking place in Tokyo, London and Asbury Park, New Jersey.

For over 12 years ATP has set itself apart from other festivals by embracing seemingly disparate artistic genres, with events featuring art exhibitions, cinema programmes, spoken word performances and stand up comedy. It's been called 'Unforgettable' by Spin and 'the most enjoyable festival experience of our reporter's life' by Pitchfork. It has spawned an acclaimed concert series (Don't Look Back), a record label (ATP Recordings), and the release of a feature length documentary about the festivals from Warp X, titled All Tomorrow’s Parties, out now on DVD. For more information and the trailer visit www.ourtrueintent.com