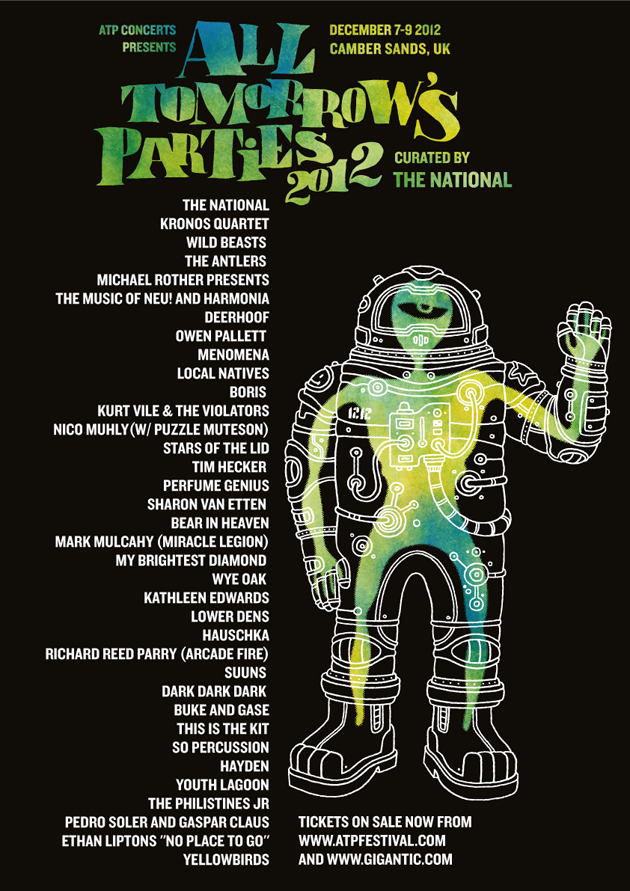 ALL TOMORROW'S PARTIES curated by THE NATIONAL
December 7th-9th 2012 at Pontins, Camber Sands, UK
-Wild Beasts performing ‘Smother’, The Philistines JR, Pedro Soler & Gaspar Claus and Ethan Lipton’s ‘No Place To Go’ added! -
Earlier this year, All Tomorrow's Parties announced a three day event curated & headlined by Cincinnati, Ohio's THE NATIONAL. ATP are very excited that the band have accepted our invitation to headline and to curate an exciting supporting bill featuring many of their favourite artists.
Today we can announce a third wave of artist’s to the bill, including a performance of one of last year's most highly rated albums, as well as other influential underground artists…
Wild Beasts performing ‘Smother’ in it’s entirety

ABOUT ALL TOMORROW'S PARTIES:

All Tomorrow's Parties has been promoting festivals and concerts throughout the world for the last twelve years. It was founded in the wake of Belle and Sebastian’s Bowlie Weekender, with Mogwai curating in the unusual setting of Pontins Holiday Camp, Camber Sands. Since then the festival has appeared every year and has expanded across the globe continuing to set itself apart from large scale corporate festivals by staying intimate and fan-friendly. The line-ups are chosen by significant bands or artists which results in eclectic events that combine performances by legendary and influential acts with appearances by the latest crop of experimental artists from any (and every) musical genre. The festival has become more successful with every passing year, and ATP events have taken place in the UK, USA, Europe and Australia, with past curators including Nick Cave & The Bad Seeds, Mike Patton, My Bloody Valentine, Portishead, Sonic Youth, Slint, and Tortoise. In 2011 ATP launched a new series of curated city-based events called I'll Be Your Mirror, with events so far taking place in Tokyo, London and Asbury Park, New Jersey.

For over ten years ATP has set itself apart from other festivals by embracing seemingly disparate artistic genres, with events featuring art exhibitions, cinema programmes, spoken word performances and stand up comedy. It's been called 'Unforgettable' by Spin and 'the most enjoyable festival experience of our reporter's life' by Pitchfork. It has spawned an acclaimed concert series (Don't Look Back), a record label (ATP Recordings), and the release of a feature length documentary about the festivals from Warp X, titled All Tomorrow’s Parties, out now on DVD. For more information and the trailer visit www.ourtrueintent.com