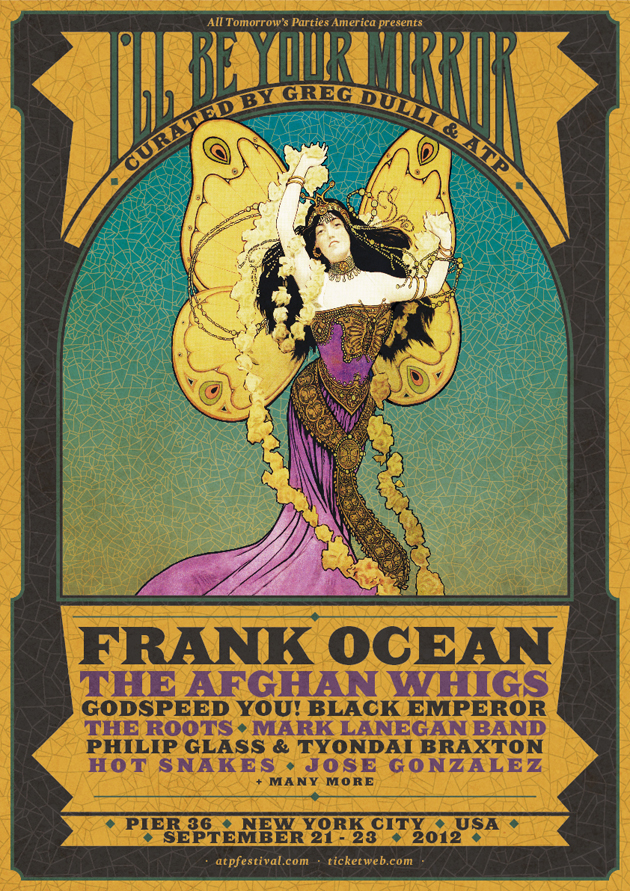 Weekend/Day Passes On Sale via This Link

"In terms of vibe, it is simply the best music festival there is." - NPR

ATP Concerts today announce the relocation of this September's New Jersey based I'll Be Your Mirror festival event to Pier 36 in Manhattan, New York.

Pier 36 was the intended home for I'll Be Your Mirror beginning in 2013 - but due to unavoidable logistical concerns (along with a lack of available fan accommodations in Asbury Park), ATP has decided to move there for this year's event.

Some artists who are unable to play the new location - the following statement comes from Louis CK's management:

"Louis CK who was originally scheduled for the Asbury Park event will not be performing at ATP in Manhattan due to scheduling conflicts. Check louisck.com for info about his tour schedule."

Sharon Van Etten, Reigning Sound and Factory Floor will also not be available to perform. All other previously announced artists will perform as originally scheduled.

"We hope that the new venue will make for an incredible event and open up many other accommodation options to fans who were unable to find rooms in Asbury Park," comments ATP's Barry Hogan. "We sincerely apologise to those inconvenienced by the move and hope that any problems caused may be minimised by the relatively small distance between the two locations."

Pier 36 is a new indoor venue sitting on the edge of the East River between the Manhattan & Williamsburg Bridges - it's outside area boasts glorious views of Brooklyn and the Statue of Liberty.

The Saturday night of this year's festival will be headlined by The Afghan Whigs (who have reunited after a 13 year hiatus) and curated by their frontman Greg Dulli, with ATP curating the Friday and Sunday nights.

Tickets are on sale now priced at $199 for the Weekend, with Day Passes also newly available priced at $60 for Friday & $75 for Saturday/Sunday.

Full information on the additions to all three days of the line-up...

Friday will feature both music and comedy - we can now announce a musical headliner for Friday, as esteemed composer PHILIP GLASS teams up with TYONDAI BRAXTON (former Battles member) for a completely unprecedented live collaboration. Other stellar additions to the day's musical line-up are LIGHTNING BOLT - one of the world's most unmissable live acts, and LEE RANALDO of Sonic Youth. Joining the Friday on the Comedy stage is none other than standup/actress JANEANE GAROFALO and newcomer KURT BRAUNOHLER, with more to be confirmed. Friday tickets cost $60.

Saturday, headlined by THE AFGHAN WHIGS and featuring a stellar list of artists chosen by the Whigs' frontman Greg Dulli, has three new artists. First up are alternative rock band CHAVEZ, who returned to the live arena in the last few years to much acclaim, and they're joined by Italy's AFTERHOURS (past collaborators with Greg Dulli) and Ohio based singer/songwriter JOSEPH ARTHUR. They join the previously announced Saturday line-up of The Afghan Whigs, The Roots, José González, Mark Lanegan Band, Dirty Three, The Antlers, The Dirtbombs, Scrawl, Emeralds, Vetiver, Charles Bradley And The Extraordinaires and DJ Questlove with more to be confirmed. Tickets for this day cost $75.

As well as the live music line-up and comedy on the Friday, our friends at The Criterion Collection will return to run the Cinema across the weekend. All three days feature DJs and other activities to be confirmed in the months ahead. Each day runs from noon-midnight.

Here is an updated look at the line-up so far including the new additions...

Tickets are on sale now - click here to buy.

The five boroughs of New York City are home to an incredibly wide selection of accommodations - tar too many for us to list - airbnb.com, hotwire.com, booking.com, hotels.com and tripadvisor.com are good places to research. Those ATP ticketholders who have been waiting for information regarding rooms at Asbury Park's Berkeley hotel will be emailed information regarding reduced booking rates at Manhattan's Ace Hotel.

Pier 36 is located at the intersection of South Street and Montgomery Street (off the FDR Drive) just north of the Manhattan Bridge at 299 South St. New York, NY 10002. Google Maps: http://goo.gl/maps/D4W1

Southbound - Take FDR Drive south and exit at South Street (exit #3) At the light at the bottom of the ramp – turn left and proceed under the highway - Pier 36 is directly in front of you.

Northbound - Take South Street north (under the FDR highway), past the South Street Seaport (do not go on the FDR Drive). Continue north on South Street (under the Manhattan Bridge, Pathmark on your left), until you see the Department of Sanitation on your right. At the next intersection (South Street and Montgomery Street), turn right at the light for Pier 36.(the entrance for the FDR north will be directly in front of you at the light).

"Sometimes promoters have good ideas. And those guys pretty much always do, and I have to say as festivals go, that's the best one out there." - Mike Patton

All Tomorrow's Parties has been promoting festivals and concerts throughout the world for the last thirteen years. It was founded in the wake of Belle and Sebastian’s Bowlie Weekender, with Mogwai curating in the unusual setting of Pontins Holiday Camp, Camber Sands. Since then the festival has appeared every year and has expanded across the globe continuing to set itself apart from large scale corporate festivals by staying intimate and fan-friendly. The line-ups are chosen by significant bands or artists which results in eclectic events that combine performances by legendary and influential acts with appearances by the latest crop of experimental artists from any (and every) musical genre. The festival has become more successful with every passing year, and ATP events have taken place in the UK, USA, Europe and Australia, with past curators including Simpsons creator Matt Groening, Nick Cave & The Bad Seeds, Mike Patton, My Bloody Valentine, Portishead, Sonic Youth, Slint, and Tortoise. In 2011 ATP launched a new series of curated city-based events called I'll Be Your Mirror, with events taking place so far in Tokyo, London and New Jersey.