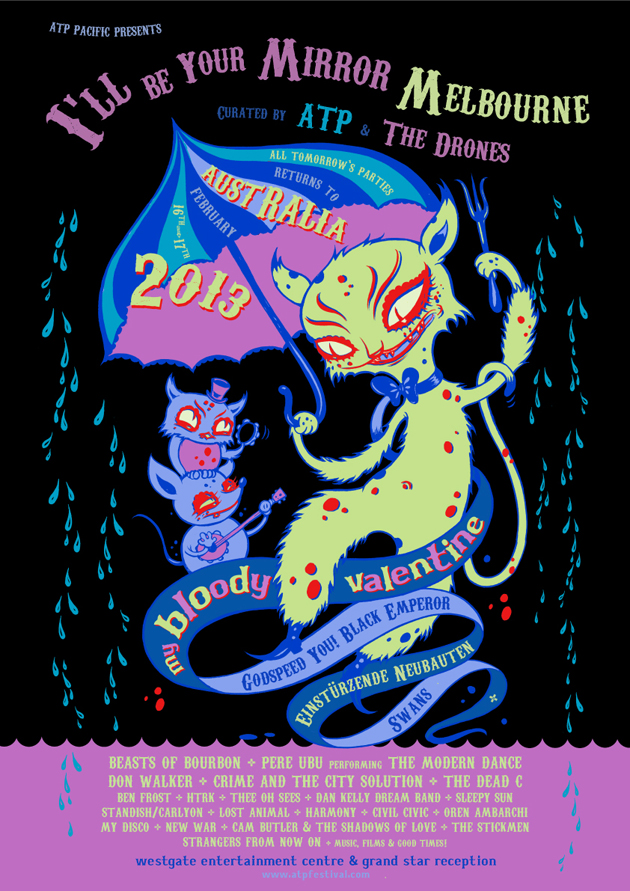 ATP confirmed late last year that they will return in February for a very special I'll Be Your Mirror event in Melbourne. Acting as sister events to the ATP Festivals which usually take place in holiday resorts, I'll Be Your Mirror is a series of artist curated music, film and art events taking place in cities worldwide, launched by ATP in 2011. IBYM is ATP without the accommodation aspect and is named after the b-side to The Velvet Underground's original All Tomorrow's Parties 7" single.

The Saturday of the event is curated by ATP and is headlined by the mighty my bloody valentine playing their first Australasian show since 1991 and Godspeed You! Black Emperor (playing their first ever Australasian show) plus many more. The Sunday is curated and headlined by Australian natives The Drones alongside the original line-up of Beasts Of Bourbon, the first Australian show since 1991 from Einstürzende Neubauten and many more.

OREN AMBARCHI (Australia) is a composer and multi-instrumentalist with longstanding interests in transcending conventional instrumental approaches. His work focuses mainly on the exploration of the guitar; he has collaborated with Sunn O))), Boris and many others. An ATP favourite, we're very happy to add him to our day.

Influenced as much by Classical Minimalism as by Punk Rock and Metal, BEN FROST's (Australia) throbbing guitar-based textures emerge from nothing and slowly coalesce into huge, forbidding forms that often eschew conventional structures in favor of the inevitable unfoldings of vast mechanical systems.

Formed in 2009 by guitarist Aaron Cupples and bass mangler Ben Green, CIVIL CIVIC (Australia) also include ‘The Box’, their drum machine/light show/robot sidekick. The band quickly manifested itself as a two-part human, one-part machine, three-piece instrumental act, it didn’t take long for them to get noticed.

NEW WAR (Australia), blooming from their own strange corner of Melbourne, have spent the last couple of years simmering in their own alchemy, plotting. Featuring former members of cult bands Shoplifting, Bird Blobs & Sir, they have quietly amassed a loyal audience, sharing the stage with the likes of Wire, Gossip, Laughing Clowns & Jandek, all on word of mouth.

Formed in early 2010 in Melbourne, STRANGERS FROM NOW ON (Australia) began as a collaboration between vocalist Gabriel Santos’ theatrical and lyrically focused songwriting and Aidan Kelly’s guitar sound; a combination of atmospheric swirling and screaming noise and lead lines that roll with a kind of drunken precision. Their songs are equally haunting and beautiful, snap changes move from tense whispers to violent shrieks.

PERE UBU (USA) burst upon the scene in 1975 and changed the face of music. For over 35 years they’ve defined the art of cult; refined the voice of the outsider; and influenced the likes of Joy Division, Pixies, Husker Du, Henry Rollins, REM, the Sisters of Mercy, Thomas Dolby, Bauhaus, Julian Cope and countless others. Pere Ubu make a music that is a disorienting mix of midwestern riff rock, “found” sound, analog synthesizers, falling-apart song structures and careening vocals. It is a mix that has mesmerized critics, other musicians and fans ever since. They will be performing their classic debut album The Modern Dance in full - one day shy of the 35th anniversary of it's release - as part of this special appearance!

CRIME AND THE CITY SOLUTION (Australia) recently announced details of their first tour in over 20 years, following the release of An Introduction To... Crime & the City Solution – Berlin 1987 - 1991. This retrospective will be followed by a new album, American Twilight. Recorded in Detroit, this will be Crime & the City Solution’s first studio album since 1990’s Paradise Discotheque. This latest incarnation of the band will feature Berlin era members Simon Bonney (vocals), Bronwyn Adams (violin) and Alexander Hacke (guitar), and will be joined by renowned visual artist Danielle de Picciotto, Jim White (drums, The Dirty Three), David Eugene Edwards (guitar, 16 Horsepower / Wovenhand), Troy Gregory (bass, The Dirtbombs / Swans / Spiritualised) and Matthew Smith (keyboards).

DON WALKER (Australia) was born in Ayr, Queensland, in 1951. He is publicly known as a founding member of and songwriter for Cold Chisel and for his solo shows and recordings under his own name and under the name Catfish. He has also toured and recorded with Tex Perkins and Charlie Owen. His first book, Shots, was published by Black Inc. in 2009. A new set of songs and recordings, mixed by Joe Henry, will be released in 2013. Don Walker will be appearing at The All Tomorrows Parties Festival with his band, the Suave Fucks, featuring Red Rivers on guitar.

THE STICKMEN (Australia) emerged from Hobart’s iconic music scene of the 90s and with their unique brand of frenetic psychedelic surf/noise rock forged a reputation as one of the great live acts of the time. They released two innovative albums before splitting in 1999 dissolving into obscurity. They now reform to play “I’ll Be Your Mirror” Altona 2013.

DAN KELLY (Australia) moved south to Melbourne in the late 90s, having spent an itinerant youth labouring on Queensland farms and dreaming of better days as an itinerant, 20-something musician. His reputation as a writer and singer of rare talent quietly spread through music circles on the strength of a homemade demo and ever-compelling live performances. He will perform with his DREAM BAND feat. members of Augie March and Ground Components.

Founded in 2003, MY DISCO (Australia) have spent nearly a decade defining and refining their sound in a way that defies rock music's most enduring tropes. Each new album finds them subtracting a little more, applying minimalist instincts to relentless, stripped-bare post-punk grooves. The result is a hypnotic, almost subconscious body music that lives and breathes with the persistent repetition of a heartbeat and the menacing precision of a sniper.

Here is how each day is currently looking with DJs and more to be added:

Date: The festival takes place on two days - Saturday 16th and Sunday 17th February, 2013. The event starts at midday on Saturday and Sunday until late.

Tickets: Tickets are priced at $135 (+ booking fee) for a single day pass and are on sale now from This Link. Saturday Day passes and Weekend Passes are now sold out.

Transport: See our FAQ for details. 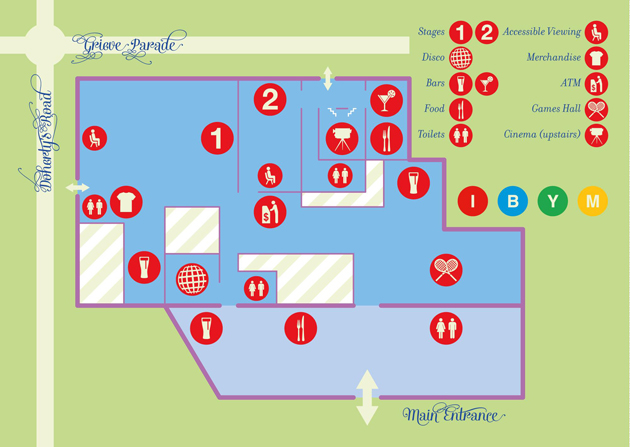