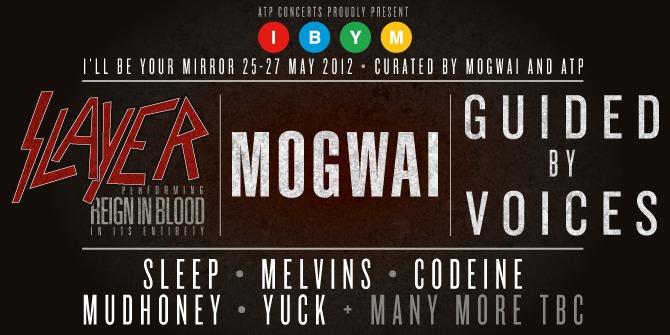 On the weekend of the 25th-27th May 2012 at Alexandra Palace, London, All Tomorrow's Parties will present the second UK I'll Be Your Mirror event. Tickets are on sale via this link from Friday 11th November at 10am.

ATP are incredibly excited to announce that this year the event starts on Friday 25th May when the incomparable SLAYER will present their undisputed classic Reign In Blood live in it's entirety during their headline set to celebrate it's 25th anniversary! Released in 1986, it is widely considered one of the greatest albums of all time - in 2006 Metal Hammer named it "The best metal album of the last 20 years." Joining Slayer on Friday night are influential doom metal trailblazers SLEEP - this will be their first UK visit since reforming for two amazing ATP festival shows in 2009, and legendary Washington sludge group MELVINS, with more to be confirmed.

On Saturday 26th May, the first ever ATP festival curators MOGWAI will return to headline, and to curate the rest of the day's line-up - this will be their only show in England in 2012 and their first choices to play alongside them are another great Washington band in the form of the fantastic MUDHONEY, and playing their first shows since 1994 with their original line-up in anticipation of also re-issuing their astounding back catalogue, reformed slow-core heroes CODEINE return to the UK (more info on their reunion here). More of Mogwai's choices are to be confirmed very soon.

On Sunday 27th May, the line-up will be curated by ATP, who are very excited to announce that our first confirmed headliner comes in the form of reformed indie rock legends GUIDED BY VOICES - playing their  first UK show since 2003 with their classic line-up in the lead up to a highly anticipated new album. They will be joined by a full line-up of stellar artists including some amazing exclusives - the first act to announce are the excellent YUCK.