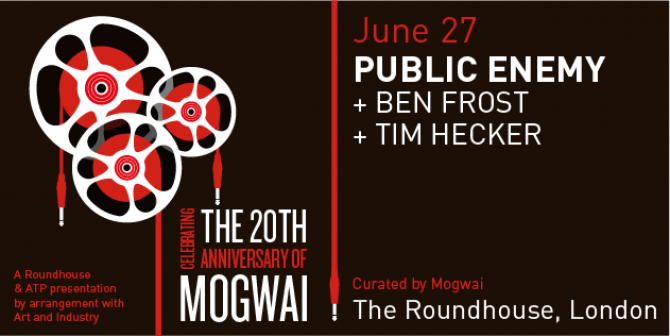 ATP are very excited to announce the supports for the upcoming Public Enemy show at the Roundhouse in London. The show is part of an on-going series of events to celebrate the 20th Anniversary of Glaswegian post-rock legends Mogwai.

ATP and the Roundhouse today announce a season of shows curated by post-rock legends Mogwai. For this ATP Season at the Roundhouse, the legendary Glasgow band celebrate their 20 year anniversary by hand-picking a line-up of seminal artists that have challenged, intrigued and inspired over the past two decades to headline the shows, including Public Enemy, GZA, Godspeed You! Black Emperor & The Jesus & Mary Chain, the latter performing their seismic debut album Psychocandy in full.