All Tomorrow's Parties follow the hugely popular I'll Be Your Mirror Melbourne with... 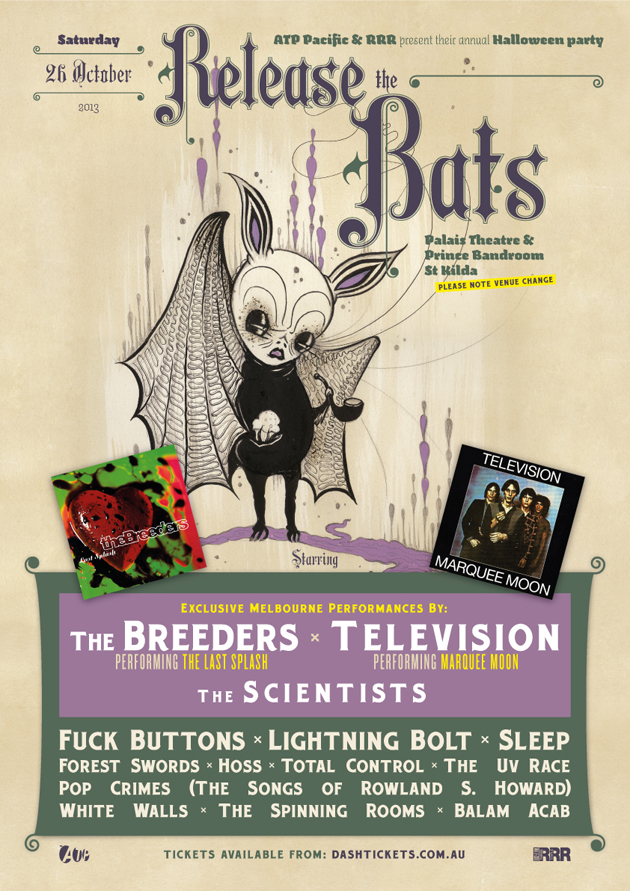 On Sale Now via This Link!

We know that you aren't terribly into Halloween.  We find this to be a bit of a shame.  Therefore we want you to try something to help remedy that situation and get you to look forward to Halloween this year just as much as we do.  And not just dress up all crazy and dark.  Not saying that you shouldn't.  You definitely should.  Get dark.  It's Halloween, dammit!

It's not because we particularly care all that much about how a bunch of disaffected and fatally unprepared religious coconuts left England's green shores on a questionably named boat, and, having lost half of their number to the cruel hardships of their first winter, then felt the need to thank God profusely every time the autumn harvest promised to keep them alive. In turn they let this devolve into either kids extorting candy from surly neighbours, or, conversely, hiding from the neighbours' awful blackmailing kids.

It is in fact because we sincerely love one last big old bash before - in the case of America or England - it gets too cold to do stuff, or in the case of Australia - too hot to do stuff.  And, because we love doing this, we've gone and got a bunch of excellent live-music playing people in the one place, and asked them to get busy doing what they do best.  Creating music that will make you feel alive.

We call it RELEASE THE BATS, and you may get excited about it being held IN AUSTRALIA this year RIGHT NOW!!  Attending this excellent event is what we would like you to try.

Why are we all excited about this?  We haven't done it in Australia yet.  And, if you're as old as we are, you will have heard of a little band that was around a few years back called The Breeders, and, having managed to talk them into putting on their floaties for a Last Splash in the UK, we thought we might try and  talk them into coming down to perform at the Westgate Entertainment Centre and Grand Star reception in Altona, Melbourne - the site of our recent I'll Be Your Mirror festival co-curated by The Drones. GUESS WHAT?!! YES!!! THEY SAID YES!!!

That makes us feel all good and warm and fuzzy.
That, however, is not, in and of itself, terribly scary.
Like we said before, it's Halloween, dammit.
We want you to be quaking in your boots.
Literally and figuratively.
We conjured something that will.

Prepare your soul for a dark journey, fellow traveller.  The core of your very being will be assaulted by the audio maelstrom that is the Jesus Lizard - flying in for this very rare and exclusive appearance - their first Australian visit since 1998.  They will summon five kinds of hell, and unleash raw, dark forces that will confront your psyche.  They promise the sonic equivalent of staring at the sun.  Hope that you are ready for the starkness that is reality when, like all things in this existence, it ends.

Like we said, prepare yourself.  We suggest using the medium of wardrobe to pay homage via a particularly clever reference to either: one of the bands playing, or one of their finer recognisable pieces of either album or single work, and you will be found.  And you will be rewarded.  With a prize.  We don't know what the prizes are yet (give us a break - its 6 months away!), but we are working on it, but you can probably guess that it is going to be something completely awesome.  Just like this, the first time ATP sets out to RELEASE THE BATS!

+ more to be confirmed!

Date: The festival takes place on Saturday October 26th 2013. The event starts at midday and runs until 1am - headliners will finish by 11pm with around 14 acts in total set to play live.

Location: Another unique aspect of ATP’s I’ll Be Your Mirror is the location, offering both indoor and outdoor space just a stones throw from the CBD. The Westgate Entertainment Centre and Grand Star Receptions - two venues in one complex in Altona - just 13km away from the centre of Melbourne. And no - it won't be as hot as last time. There will be two stages, a cinema, art exhibition and an amazing food court. The event is limited to just 5000 attendees. One of the extracurricular highlights of our recent event, Pricasso, will return to paint some special Halloween portraits in his own inimitable style.

Tickets: Tickets are priced at $150 (+ booking fee) and are on sale now from this link!

Transport: There will be a shuttle bus operating from Newport Station (the nearest station to the festival) to the venue and back priced at $2 each way. You can catch a train to Newport Station from Flinders Street, Southern Cross, North Melbourne, South Kensington, Footscray, Seddon, Yarraville, Spotswood and Williamstown. We will be running other buses from the CBD you can pre-book closer to the event and there is also on-site parking available at the venue. A taxi for 4 people from the CBD will cost around $35 - $40, $38 from St Kilda and around $42 from Fitzroy. More info on exact up-to-date transport details will be emailed to all ticketholders closer to the event.

Other Details: The event is restricted to over 18s only.

The amazing artwork for this event is by acclaimed artist Camille Rose Garcia.

Applications for media review passes are now open. A media pass is a single ticket issued to those attending to review the festival, and there is only one ticket allocated per outlet. To apply please register your interest before Friday the 19th of April. We will not be accepting requests after this date. You will be notified whether your application has been successful by Friday the 26th of April. Thank you!