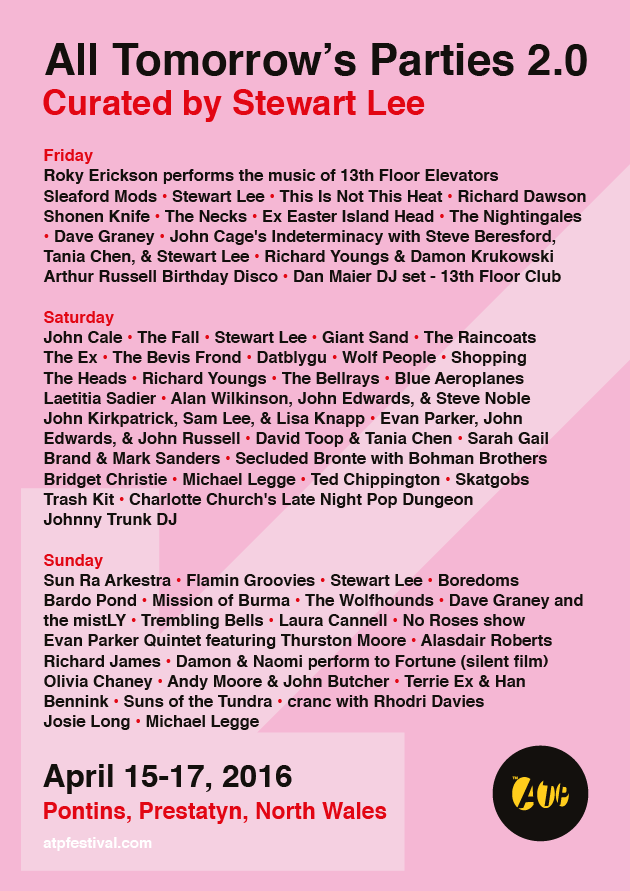 At the end of 2013, ATP bid farewell to our signature UK holiday-camp events. Though through following the continued reaction of our long-standing fans to this news, and seeing their feelings even further confirmed in last year's ATP Survey which was completed by thousands - we were thrilled to return to UK Holiday Camps in November 2015, and then even more so to announce the addition our second event here for April 2016; curated by the one and only Stewart Lee.

Prestatyn has the great benefit of being far more respectful location-wise to our nationwide customer base than previous sites, while still being within easy reach of international airports for our non-UK attendees.

As for the site itself, we feel that previous ATP attendees will see it contains the best parts of both Minehead and Camber, plus a whole load more on top of that:

- The accommodation at Prestatyn is arranged in such a way that it surrounds the back of the venue complex, rather than stretching out in one direction like previous ATP sites - meaning that there is minimal difference in the time it will take customers to get from their chalets to the venues wherever they happen to be staying.

- Pontins Prestatyn offers 2-berth accommodation; which many of our attendees missed at Camber after attending ATP events at Minehead.

- The venue complex has two large-capacity stages, both boasting multiple-tiered seated areas to assist with visibility.

- There is a Nisa Supermarket onsite at Pontins for your day to day needs, but if you're looking for something larger - the Parc Prestatyn shopping centre is only a 5 minute drive or 20 minute walk away, and hosts a Marks & Spencer, Tesco, Boots, and more.

- The beautiful sandy beachfront is also only a few hundred metres walk away!

As well as the top-notch musical line up of approximately 40 acts which we will be unveiling more of over the coming months, we will also have a full range of extra-curricular activities on offer including ATP TV in every chalet, ATP Cinema programme, Rock 'n' Roll Bingo, Pop Quiz, ATP Karaoke, and much more besides. To the great pleasure of many of our attendees too - we can confirm that our late night DJs will be playing until 4am!

Also, due to the growing amount of our attendees with young families - we are offering family accommodation deals, the chalets for which will be located in a separate quieter area of the site with low walk-through from other customers. We will also be organising a special programme of children's cinema & entertainment.

The original boutique festival, All Tomorrow's Parties was founded in 2000 - with Mogwai curating - in the then unusual setting of Pontins Holiday Camp, Camber Sands, UK. Since then the festival has expanded across the globe continuing to set itself apart from large scale corporate events by staying intimate and fan-friendly, whilst influencing countless other festivals along the way.

Our holiday-camp weekenders offered something that was inimitable in a city, and that we are excited to continue with. Not just for the nostalgia of the past, but to make the events of the future as memorable and iconic as any previous ATP ever was. Some of the best weekends of ours and our customers lives have taken place in these places. Places so removed from our everyday, busy, city existences. An out of season holiday-camp turned into a temporary town of like-minded music fans.