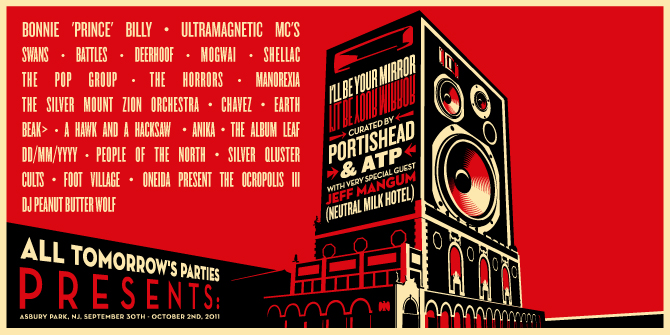 However due to public demand, ATP are releasing a small amount of 'Portishead Three Day Passes' via this website at 10am EDT tomorrow. These passes do not include access to the Jeff Mangum show, but do allow passholders to see everything else from Friday-Sunday as well as giving priority access with the day pass holders to BOTH Portishead shows on Saturday and Sunday. Existing Day ticketholders or Jeff Mangum Three Day pass holders who wish to switch to a Portishead Three Day Pass should contact ATP via feedback@atpfestival.com before May 30th.

Today we can also confirm more of the amazing line-ups for Saturday and Sunday as curated by Portishead...

Saturday 1st October which is headlined by PORTISHEAD will now feature the legendary SWANS who returned recently to release one of the best albums of 2010. Still one of the most intense live acts on the planet, they will no doubt be a fantastic addition to the festival. The stunning BATTLES who return this year with a fantastic new album will also play. In 2009 the Flaming Lips curated ATP New York and invited ONEIDA to create a special performance for the event. Oneida mounted a special all-day installation in which the impetus, spirit and community of the Ocropolis, their multidisciplinary studio/performance space, was bought to the festival grounds for a full day of improvisation, collaboration, and recording, open to all festival attendees. Numerous musicians and performers participated in this 12-hour nonstop event, including members of Boredoms, Flaming Lips, Akron/Family, and more. At the invitation of Godspeed You! Black Emperor, Oneida's second Ocropolis event took place in the UK in December, where members of Godspeed, Deerhoof, The Dead C, Hallogallo, White Hills and others joined them. Now for ATP I'll Be Your Mirror in Asbury Park this September, Portishead have chosen ONEIDA PRESENTS THE OCROPOLIS III which will take place at the Asbury Lanes Bowling Alley - the band will perform continuously throughout the day, sometimes with guests from the rich array of musicians also performing in the festival, sometimes alone and mostly improvised. Finally we are pleased to announce that Stones Throw Records artist PEANUT BUTTER WOLF to DJ on the Saturday.

They join the previously announced line-up for Saturday including the reformed ULTRAMAGNETIC MC'S, THE HORRORS, reformed post-punk luminaries THE POP GROUP, Simeon of Silver Apples and Hans-Joachim Roedelius of Cluster/Harmonia as SILVER QLUSTER, BEAK> (feat Geoff Barrow of Portishead) and FOOT VILLAGE with more to be confirmed.

On Sunday 2nd October which is also headlined by PORTISHEAD we are very pleased to present DEERHOOF who have just released one of their best albums in 'Deerhoof Vs Evil', and finally MANOREXIA featuring Jim Thirlwell (Foetus).

They join the previously announced line-up for Sunday which includes MOGWAI, Canada's stunning THEE SILVER MT. ZION MEMORIAL ORCHESTRA, EARTH, PEOPLE OF THE NORTH, ANIKA and DD/MM/YYYY with more to be confirmed.

Friday Day Passes are $60 – (these do not include the Jeff Mangum show in the Paramount but include everything else on that day.)

DAY PASSES ON SALE NOW FROM SEETICKETS & TICKETMASTER via THIS LINK.

+ more acts to be confirmed

+ more acts to be confirmed

Jeff Mangum's previously announced additional show on the Monday after the event is also now Sold Out.

Asbury Park and it's surrounding area has a wide variety of accommodation options many of which are listed on our website.

Trains: Asbury Park station is an easy train journey from New York Penn station - trains run back to NYC until just after midnight and start again at 5am the next morning. Trains run direct from Newark International Airport down the North Jersey Coastline to Asbury Park. Check the New Jersey Transit website for more info on connections to other areas of New York and New Jersey: http://www.njtransit.com ATP will operate shuttle buses from Asbury Park station to the main venues and back.