This will be before his appearance at Nightmare Before Christmas ATP where he was chosen by Sunday Curator Caribou.

After two years spent whipping the world into a Dabke-induced frenzy, legendary Syrian  singer and Arab icon Omar Souleyman returns to Europe in 2011 as a full-blown, phenomenon of international music.

With a select string of high-grade festival appearances lined up this summer, including a now legendary show at Glastonbury captured by the BBC, Omar’s star is only set to ascend further with the release of a much-anticipated collaborative record with longtime admirer Bjork. Also forthcoming are vinyl releases for THE classic Omar anthem “Leh Jani” (epic full-length version!) and the “Dabke 20/20” album (previously only available on CD).

Last year’s “Jazeera Nights” album (his third on Sublime Frequencies) and  accompanying tours of Europe and the US heightened the hysteria amongst fans of outernational musics, as well as hip indie kids, serious world music fans and pure party-seekers alike. Wherever he goes with his virtuouso musical comrades Rizan Sa'id (keyboards/beats) and Bahjat Ali (electric saz), the response is always the same: the wildest, most jubilant dancefloor atmosphere you can imagine.

Hailing from the rural Northeastern city of Ras Al Ain, Souleyman began his musical career in 1994 with a small group of local collaborators who he continues to work with. Since then he and his group have emerged as a staple of street level folk-pop throughout Syria, having issued more than 500 studio and live-recorded cassette albums which are easily spotted in the shops of any Syrian city.

The myriad musical traditions of the region are evident in the Omar Souleyman band's music, which reflects the sounds of Syria, Iraq, Turkey and the sizeable Kurdish population. The mood swings from coarse and urgent to dirgy and contemplative in the rugged anthems that comprise Souleyman's repertoire. Omar's superb and varied vocal stylings feature over high-octane Syrian 'Dabke', Iraqi Choubi and a host of other styles, where frenetic Arabic keyboard solos, sample hits and machine gun percussion by the incredible Rizan Sa'id intertwine with Ali Shaker's psychedelic electric saz runs.

“Haram (I Signal You Deny)” - http://www.youtube.com/watch?v=hjYNrDuRHh0 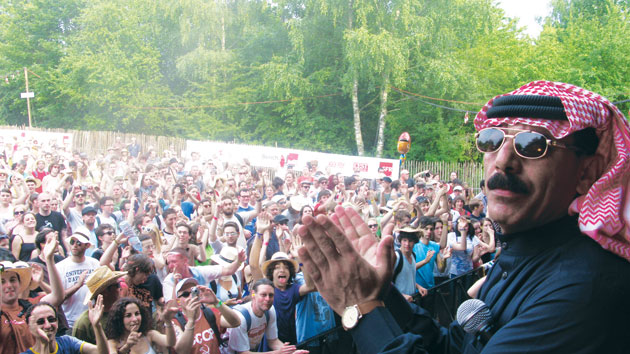