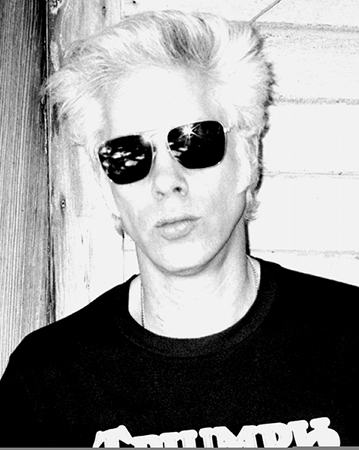 All Tomorrow's Parties will return to Kutsher's Country Club, Monticello for the third ATP New York festival over Labor Day weekend, running from Friday 3rd September – Sunday 5th September. We are very excited to announce that legendary film-maker Jim Jarmusch, well known for his fantastic collaborations and documentaries with musicians will be the guest curator on Sunday 5th.

As previously announced, Friday 3rd September features these performances as part of our Don't Look Back day:

Friday will also feature a Comedy Stage, details of which are to be announced soon.

NEWLY CONFIRMED - ATP celebrate 10 years with a birthday party on Sat 4th September and are happy to announce a day of past ATP curators, ATP Recordings artists and friends, with the first announcements being:

SONIC YOUTH
EXPLOSIONS IN THE SKY
THE BREEDERS
F**K BUTTONS
THE BOOKS
PAPA M
APSE
+ more to be confirmed!

All three days will also feature DJs and Cinema presented by Criterion.

We can also confirm that this year the bars, food vendors and Djs will continue until 6pm on Monday 6th September so that all guests can enjoy a more relaxing start to their post-ATP week!

Accommodation at Kutshers is on sale now with only 6 person rooms still available now SOLD OUT. Alternatively rooms for groups of 3 or 4 are available at the nearby Raleigh hotel (we operate a free shuttle bus between the hotel and festival site all weekend). Rooms are priced at $150 + room tax per person, full information available at atpfestival.com.

Weekend and Day Tickets, Accommodation and Bus Travel from Manhattan and Brooklyn are available now - click here to buy!

Tickets are also available in person from Other Music in New York City.

“An unforgettable end to the summer festival season.” – Spin

“ATP NY was the most enjoyable festival experience I’ve ever had in my life.” – Pitchfork

“Most of the bands seem to be strolling the grounds with the fans, unlike most festivals, where the stars seem to hide in their trailers...it’s quaint, unique location has provided the event an easy-going summer camp vibe...ATP was a great example of what a festival should be- manageable, full of cool people and boasting a solid line-up...it was a pretty perfect weekend.” - Billboard

"ATP is an animal all of its own. There is an energy that is positive, creative and palpable. Musicians wander about the grounds, checking out the bands. The sound system is killer. " - Brooklyn Vegan

"ATP is, in short, what indie rock was always supposed to be...ATP is indie rock at it's best." - The New Yorker "A weekend of musical delights. ATP remains by far the best organised, friendliest festival around." - Rolling Stone

"A festival experience like no other...Lines are non-existent; it's easy to find a spot up-close to the stage to watch your favourite band; beer is plentiful; there's seating outside by the lake; and artists wander about with the normal folk." - Spin

"The year's finest festival. If anything, this year felt more celebratory than 2008." - Stereogum

"The most focused music festival on the planet. The line-up is unique, the atmosphere is crazily mellow...Not many festivals are interested in making diehard music fans feel appreciated, or even necessary, and ATP makes that its whole point." - Fader

"Nothing like your normal three day music fest. Artistic integrity is the word of the day." - ABC News "Felt a little like the coolest prom ever...an all-out sensory overload...we'll be down for it again this time next year." - GQ

"A kind of utopia was successfully brought off last weekend at ATP...an incredible adventure in cultural escapism." - New York magazine

Kutshers is a country club based in upstate New York, less than 2 hours drive from New York City. The club is set in 1200 acres of beautiful countryside in the magnificent Catskills mountains. The resort comprises of a hotel with several bars/nightclubs and cafes/restaurants. Plus various other amenities including a swimming pool, golf course, tennis courts, health spa and much much more.

The event takes place over 3 days, from Friday 3rd September to Sunday 5th September 2010 inclusive at Kutshers. Performances starting in the mid-afternoon, with around 35 acts set to play live across the weekend with DJ sets until late into the night, comedy, movies and more. There is dining, bars and other amenities onsite. Performances all take place indoors at the intimate venues within the complex, so you have no need to fear about the weather!

All Tomorrow's Parties has been promoting festivals and concerts throughout the world for the last ten years. It was founded in the wake of Belle and Sebastian’s Bowlie Weekender, with Mogwai curating in the unusual setting of Pontins Holiday Camp, Camber Sands. Since then the festival has appeared every year and has expanded across the globe continuing to set itself apart from large scale corporate festivals by staying intimate and fan-friendly. The line-ups are chosen by significant bands or artists which results in eclectic events that combine performances by legendary and influential acts with appearances by the latest crop of experimental artists from any (and every) musical genre. The festival has become more successful with every passing year, and ATP events have taken place in the UK, USA, Europe and Australia, with past curators including Nick Cave & The Bad Seeds, Mike Patton, My Bloody Valentine, Portishead, Sonic Youth, Slint, and Tortoise.

For ten years ATP has set itself apart from other festivals by embracing seemingly disparate artistic genres, with events featuring art exhibitions, cinema programmes, spoken word performances and stand up comedy. It has spawned an acclaimed concert series (Don't Look Back), a record label (ATP Recordings), and a feature length documentary about the festivals from Warp X, titled All Tomorrow’s Parties, out now on DVD. For more information and the trailer visit www.ourtrueintent.com