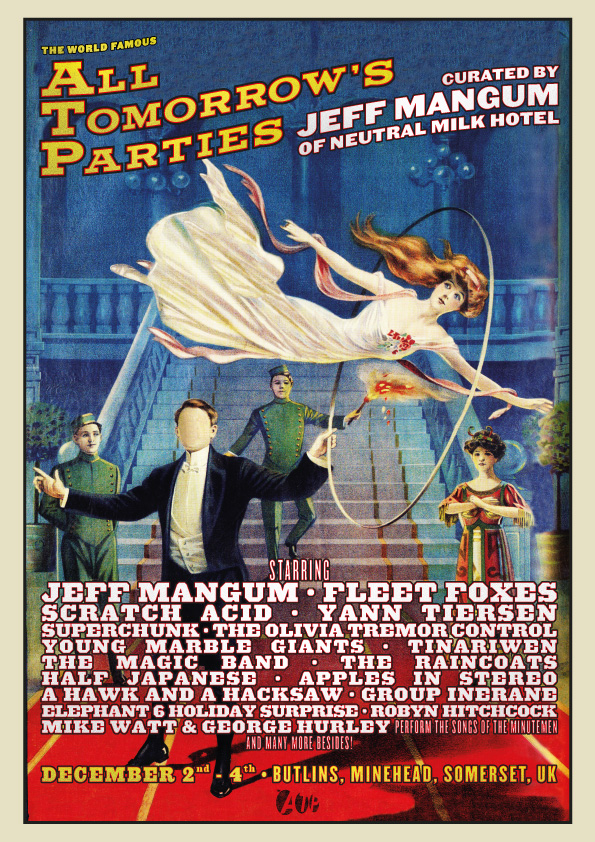 As recently announced we are very excited to present the return of Neutral Milk Hotel's Jeff Mangum to headline and curate our first of two festival weekends this December at Butlins Minehead. Today we can confirm the second stunning group of artists picked by Jeff:

After releasing one of the most criticially acclaimed albums of 2009 with their self titled debut (The Guardian called it "a landmark in American music, an instant classic"), Fleet Foxes return this year with a new album Helplessness Blues, out May 2nd on Bella Union. This will be their debut performance at All Tomorrow's Parties.

The Elephant 6 Holiday Surprise is a performance from 11+ musicians connected to the Elephant 6 record label (home to Neutral Milk Hotel) performing in various configurations (sometimes everyone on stage at once), swapping instruments and playing each other's songs as well as screening short films. For this event the group will be made up of Will Cullen Hart, Bill Doss, Peter Erchick, John Fernandes, Julian Koster, Scott Spillane, Andrew Rieger, Laura Carter, Derek Almstead, Bryan Poole, Robbie Cucchiaro and others, playing the music of Elf Power, Circulatory System, The Gerbils, The Music Tapes, The Sunshine Fix , Major Organ and Adding Machine, Pipes You See, Pipes You Don't , The Late BP Helium, plus "fun & games & surprise covers."

The line-up so far for the event now looks like this...

...with much much more to be announced! All tickets include accommodation in private apartments for you and your friends, see 'About The Venue' below for more details.

Tickets for ATP Curated by Jeff Mangum are priced at £170.00pp for room only and £180.00pp for self catering and are on sale now via this link!

Our Ticket Deposit scheme which allows you to pay £70/£80 now and the rest by the end of August is now open (applications close on 8th April), see further down for details.

AND FOR ATP DECEMBER WEEKEND 2... 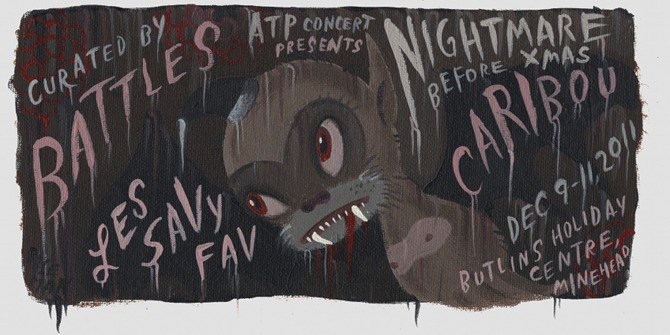 Our second festival weekend for December 2011 at Butlins, Minehead is the Nightmare Before Christmas - this year curated by three of the most stunning live acts on the planet - Battles, Caribou and Les Savy Fav. As previously announced each band will headline and choose a line-up of 14 artists for one day of the festival. Today we can confirm the second set of additions -

Bitch Magnet was formed in 1986 by Jon Fine (guitar) and Sooyoung Park (bass and vocals), soon joined by drummer Orestes Morfi?n. In 1988 they recorded a mini album Star Booty and soon after the widely-acclaimed LP Umber with David Galt on guitar. Amid a wave of extraordinarily positive notices in the British & European press, the band toured Europe, with Galt and Bastro/Squirrel Bait founder David Grubbs on guitar, in fall of 1989. The trio lineup of Fine, Morfi?n, and Park reconvened in 1990 to record what would be their final album, the hugely influential Ben Hur. The album is now often cited as a key inspiration for the kind of instrumentally-focused music that would become known as “post-rock.” Bitch Magnet played its final show on 1990 - after their dissolution, Park went on to form Seam. Morfi?n drummed in Walt Mink & Godrifle. Fine formed Vineland & Coptic Light, and briefly played in Don Caballero. Much like their contemporaries in Slint, in the years following their breakup, Bitch Magnet has been recognized as a significant influence on generations of aggressive and musically complex bands, including Don Caballero, Rodan, June of 44 and Battles. Bitch Magnet?s reunion at the Nightmare Before Christmas will mark its first live performance since 1990, and the first onstage appearance of the band?s original lineup – Morfi?n, Park, and Fine – since 1989.

That means that the line-up now looks like this...

With far more to be confirmed! In total the line-up will feature 45 live acts playing across the weekend on three indoor stages with a total festival capacity of around 5500 people. The event also includes DJs, Cinema and much more. All tickets include accommodation in private apartments for you and your friends, see 'About The Venue' below for more details.

Tickets for Nightmare Before Christmas are priced at £170.00pp for room only & £180.00pp for self catering - on sale now via this link!

An In Between Days event running between the two December festivals will be announced in the coming weeks with discounts available for those attending both weekends and those who book early.

INSTALMENT TICKETS - Please Note Last Applications Must Be Made By April 8th!

ATP will again be running a deposit scheme for the festivals to make it easier for some people to pay. We are offering a limited number of 4 berth apartments, both room-only and self-catering to be paid for with a deposit upfront, and the remaining amount to be paid by the end of August. Both come with a booking fee of £7.50 per person (£30 per apartment). These apartments will be sold at full price; £170 per person room only or £180 per person self catered.

As we will be holding the apartments for you, all deposits will be non-refundable, so please only apply if you are sure you can pay the remaining amount when it is due in August. If you are able to pay through a normal ticket agency upfront for your whole apartment, then please do so and leave the deposit scheme for those people who find it harder to get the full amount together in one go.

You will be required to pay both instalments by either Paypal or cheque. Please email deposit(at)atpfestival.com with MANGUM DEPOSIT or NIGHTMARE DEPOSIT in the email subject line if you would like to take part in the deposit scheme. Please include: your name, address, which type of room you want (room only or self catering) and which payment method you would like to use (paypal or cheque). You will then be given details of how to pay by your chosen method. Chalets will be granted on a first come first served basis so please try to pay quickly once we have given you the details so that you don't miss out (therefore we recommend Paypal over Cheque).