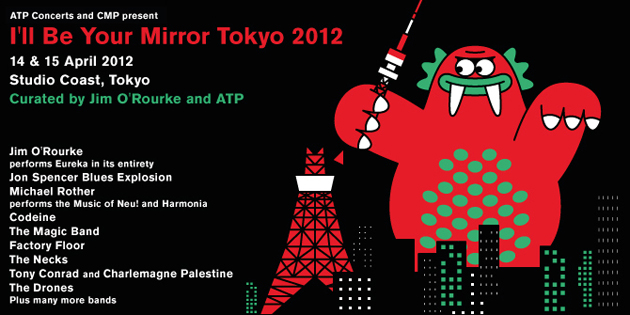 
As recently announced, on Saturday 14 & Sunday 15 April 2012, renowned concert promoters All Tomorrow's Parties will once again collaborate with Japan's Creativeman to present their second Japanese event - I'll Be Your Mirror 2012 at Tokyo's Studio Coast.

I'll Be Your Mirror has now expanded to two days, the first curated by ATP, and the second curated by very special guest JIM O'ROURKE who as headliner will play a special one off performance of his classic Eureka album with a 12 piece band. The intimate event will feature music, DJs, and much more. Today we can announce the start of the line-up...

Tickets for buyers outside of Japan will also be on sale from this website.

Event opens at 1pm on both days with music starting at 2pm.

"Sometimes promoters have good ideas. And those guys pretty much always do, and I have to say as festivals go, that's the best one out there." - Mike Patton

All Tomorrow's Parties is an organisation based in London that has been promoting festivals, concerts and records throughout the world for over ten years. It was founded by Barry Hogan in 1999 in preparation for the first All Tomorrow's Parties festival, the line-up of which was curated by Mogwai and took place in the unusual setting of Pontins Holiday Camp, Camber Sands.

Since then the festival has appeared every year, and continues to set itself apart from festivals like Reading or Glastonbury by staying intimate, non-corporate and fan-friendly. Another vital difference is that the line-ups are chosen by significant bands or artists, resulting in unpredictable and exciting events which combine performances by legendary and influential acts with appearances by the latest crop of experimental artists from any (and every) musical genre. The All Tomorrow's Parties festival has become more successful with every passing year, moving in 2006 to a larger holiday camp. It has taken place in the UK, USA and Australia, and has been curated by the following artists:

All Tomorrow’s Parties also sets itself apart from other festivals by embracing seemingly disparate artistic genres. Most festival events feature art exhibitions and cinema programmes (in the USA ATP collaborate with Criterion to present cinema highlighted by appearances so far from Paul Schrader and Jim Jarmusch), and others have featured spoken word performances, stand up comedy and book clubs.

In 2007 the curators allowed festival goers to pick the line-up by organising a voting process for all ticketholders in the months running up to the event, and this was repeated in May 2009. The festival now takes place up to three or four times a year in the UK (in May and then in December for the 'Nightmare Before Christmas'). In recent years ATP's involvement in festivals has spread further; including curating a yearly stage at Barcelona's acclaimed Primavera Sound Festival, and also curating a stage at Pitchfork Magazine's Music Festival in Chicago in 2007 and 2008.

In 2008 ATP organised their first east coast U.S. festival at Kutshers Country Club, Monticello, New York. It was called 'an unforgettable end to the summer festival season' by Spin magazine, and Pitchfork stated that it was: 'the most enjoyable festival experience of our reporter's life.' ATP returned to Kutshers in September 2009 with guest curators The Flaming Lips to even more positive critical reaction, and September 2010's event guest curated by Jim Jarmusch was called 'The Perfect Rock Festival' by Rolling Stone.

At the start of 2009 the first ATP Australia festival took place in Mt. Buller, Sydney and Brisbane, all curated by Nick Cave & The Bad Seeds to huge acclaim in all locations.

Significant past performances at ATP festivals include the reformations of The Magic Band, Television, The Jesus Lizard, Sleep, and Slint amongst others. All Tomorrow's Parties were also proud to present the return of My Bloody Valentine with a series of worldwide live performances throughout 2008, the London concerts of which were named Time Out's Gig Of The Year.

2009 saw the release of a feature length documentary named All Tomorrow’s Parties; a DIY concert film featuring performances from an eclectic mix of some of the most influential or groundbreaking artists that have appeared at ATP including Battles, Sonic Youth, Belle And Sebastian, Grinderman, Iggy and the Stooges,  Portishead,  Mogwai,  Slint, Grizzly Bear, the Yeah Yeah Yeahs, the Gossip, Daniel Johnston, and The Boredoms. The film is a semi-found bricolage made from Super8, camcorder and mobile phone footage much of it contributed by over two hundred filmmakers, fans and musicians over the festival’s recent history, with key contributions from Jonathan Caouette (Tarnation) and Vincent Moon (The Take Away Shows, Arcade Fire). It premiered at SXSW Film in March 2009 and was singled out by the events’ curator as being of particular artistic merit.

In 2011, ATP started "I’ll Be Your Mirror", a new series of artist curated music, film and art events. Acting as sister events to the ATP Festivals, which take place in holiday resorts, I'll Be Your Mirror retains the curatorial and multiple band and film concept, but will take place in cities worldwide. The events are named after the b-side to The Velvet Underground's original All Tomorrow's Parties 7" single, released in 1966.