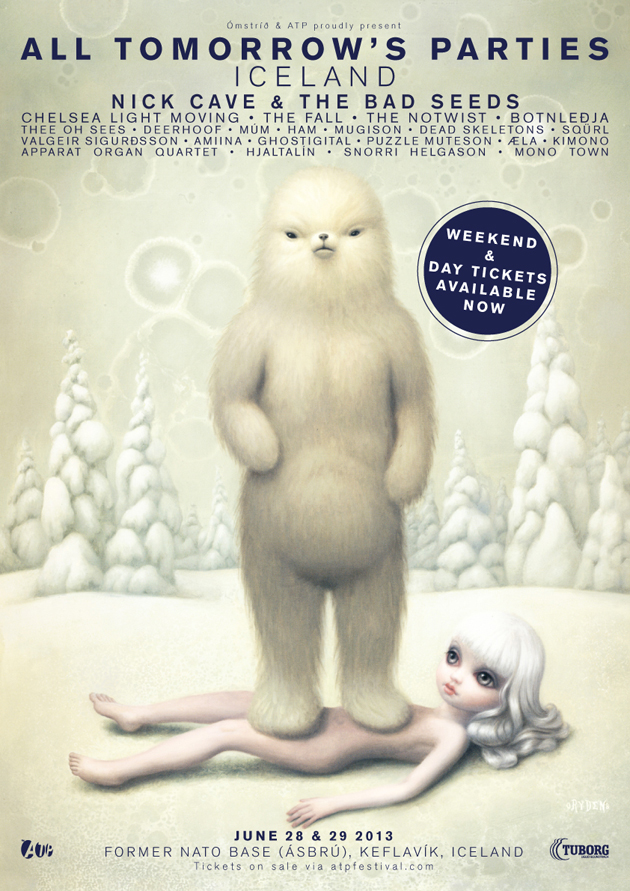 The World Famous ATP Music Festival series is proud to present the line-up for:

Tickets Available Now via This Link!

Described as the "ultimate mix tape", All Tomorrow's Parties is a boutique festival that goes against the grain of the larger, more commercial music festivals - with quality and customer experience coming first - presenting award winning sound and acclaimed organisation. Since 2000 it has spread its ethos of uniquely intimate and eclectic events through the UK and onwards to Spain, Australia, Japan and the USA.

Recently ATP was very excited to announce our first All Tomorrow's Parties festival in Iceland on June 28th & 29th at the former NATO base in Keflavík, which is now called Ásbrú.

Today we can announce the full line-up which is headlined by the incomparable NICK CAVE & THE BAD SEEDS - this is the first Icelandic Nick Cave show since 2006 and the first show with The Bad Seeds since a legendary 1986 visit. Mr Cave states that the first All Tomorrow's Parties Iceland will be: "My favourite festival in my favourite country..."

We can now reveal the line-up for the event:

We can also confirm that alongside performing in SQÜRL, legendary film director Jim Jarmusch will be choosing the films playing in the festival cinema on one of the days. The other day will have films selected by other bands on the line-up.

Date: The festival takes place on two days - Friday 28th and Saturday 29th June, 2013. The music will run from 6pm to 2am each day (exact times subject to change) with around 20 acts set to play live across the two days.

Location: ATP Iceland will be held at Ásbrú, the former NATO base in Keflavík, Iceland. The former NATO base dates back to 1941 and the last US military personnel left in 2006. The site is located only 5 minutes away from Iceland's main international airport, 15 minutes from the famous Blue Lagoon and 30 minutes from Reykjavík. The festival site will host two indoor stages and a cinema with films picked by ATP and the bands, as well as the usual ATP extracurricular activities like DJs, Pop Quiz (hosted by Dr. Gunni - musician, music writer and host of pop quiz TV show Popppunktur for eight seasons) and much more. The capacity for the intimate festival is just 4000 people.

There are two types of ticket available - with or without accommodation - both types are on sale now from this link...

A normal festival ticket which allows access to the event without accommodation. These are priced at 16,900 ISK / 105 EUR (+ booking fee) per person.

2 berth - This includes two festival passes and a room for two people for the Friday and Saturday nights. Two rooms share one bathroom; which has either a shower or bath and of course a sink & toilet. These rooms have two single beds. Price for 2 people: 69,800 ISK / 430 EUR (+ booking fee) including 2 festival tickets.

4 berth – This includes four festival passes and a room for four people for Friday and Saturday nights. This option has two adjoining rooms with a bathroom located in the middle, which has either a shower or bath and of course a sink & toilet. One room has a double bed and the other room has two single beds. Price for 4 people: 139,600 ISK / 862 EUR (plus booking fee) including 4 festival tickets.

The easiest option is to take a taxi at the taxi-stand outside the airport. The festival site is a 5-minute drive away. A good taxi number in Keflavík is +354 420 12 12.

We recommend taking the FlyBus (https://www.flybus.is/flybus) from Reykjavík to Keflavík International Airport, and from there to take a taxi to the festival site. The buses leave from BSÍ, the central bus station.

There is limited on-site parking so please, if you are coming with three friends please all arrive in the same car- not four separate ones. Once the car park is full you will have to park elsewhere, so be prepared!

How to get to Iceland:

For an overview of flights from UK and other countries we recommend www.dohop.com

What else is there to do apart from the bands? Apart from nursing a hangover, there is the Blue Lagoon, a mere 15 minute drive away (this is not to be missed!), Cinema (with films picked by ATP and the bands), DJs, Book Club, Pop Quiz hosted by Dr. Gunni and of course the town of Keflavík where there are some very nice places to eat, pubs, museums to visit, shopping etc.

Bringing in food and drink from outside into the festival venues is not allowed; the venues will host their own excellent food and drink stalls. If you book tickets including accommodation, they will have shared kitchen facilities.

There is also a small shop onsite to buy essentials. Please note that no beer or other alcohol beverages are sold in convenience stores in Iceland.

All attendees must be aged 20 years or older.

About the Artist Mark Ryden:

Blending themes of pop culture with techniques reminiscent of the old masters, Mark Ryden has created a singular style that blurs the traditional boundaries between high and low art. His work first garnered attention in the 1990s when he ushered in a new genre of painting, "Pop Surrealism", dragging a host of followers in his wake. Ryden has trumped the initial surrealist strategies by choosing subject matter loaded with cultural connotation.

Ryden’s vocabulary ranges from cryptic to cute, treading a fine line between nostalgic cliché and disturbing archetype. Seduced by his infinitely detailed and meticulously glazed surfaces, the viewer is confronted with the juxtaposition of the childhood innocence and the mysterious recesses of the soul. A subtle disquiet inhabits his paintings; the work is achingly beautiful as it hints at darker psychic stuff beneath the surface of cultural kitsch. In Ryden's world cherubic girls rub elbows with strange and mysterious figures. Ornately carved frames lend the paintings a baroque exuberance that adds gravity to their enigmatic themes.

Mark Ryden received a BFA in 1987 from Art Center College of Design in Pasadena. His paintings have been exhibited in museums and galleries worldwide, including a retrospective “Wondertoonel” at the Frye Museum of Art in Seattle and Pasadena Museum of California Art, and in the exhibition "The Artist's Museum" at the Museum of Contemporary Art in Los Angeles. He currently lives and works in Los Angeles.

More About All Tomorrow's Parties:

All Tomorrow's Parties has been promoting festivals and concerts throughout the world for almost fourteen years. It was founded in the wake of Belle and Sebastian’s Bowlie Weekender, with Mogwai curating in the unusual setting of Pontins Holiday Camp, Camber Sands, UK. Since then the festival has appeared every year and has expanded across the globe continuing to set itself apart from large scale corporate festivals by staying intimate and fan-friendly. The line-ups are often chosen by significant bands or artists which results in eclectic events that combine performances by legendary and influential acts with appearances by the latest crop of experimental artists from any (and every) musical genre. The festival has become more successful with every passing year, and ATP events have taken place in the UK, USA, Europe and Australia, with past curators including Nick Cave & The Bad Seeds, Mike Patton, My Bloody Valentine, Portishead, Sonic Youth, Slint, and Tortoise. In 2011 ATP launched a new series of curated city-based events called I'll Be Your Mirror, with events so far taking place in Tokyo, London, Asbury Park New Jersey, New York City and Melbourne. ATP has set itself apart from other festivals by embracing seemingly disparate artistic genres, with events featuring art exhibitions, cinema programmes, spoken word performances and stand up comedy. It's been called 'Unforgettable' by Spin and 'the most enjoyable festival experience of our reporter's life' by Pitchfork. It has spawned an acclaimed concert series (Don't Look Back), a record label (ATP Recordings), and the release of a feature length documentary.