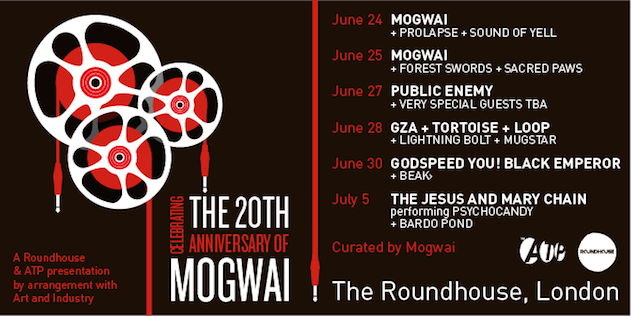 ATP and The Roundhouse today announce a season of shows curated by post-rock legends Mogwai. For this ATP Season at the Roundhouse, the legendary Glasgow band celebrate their 20 year anniversary by hand-picking a line-up of seminal artists that have challenged, intrigued and inspired over the past two decades to headline the shows, including Public Enemy, GZA, Godspeed You! Black Emperor & The Jesus & Mary Chain, the latter performing their seismic debut album Psychocandy in full.

Mogwai themselves will headline the first two nights, and all shows boast a full support bill mixing some of the band's favourite cult concerns alongside critically acclaimed up and coming artists, including Forest Swords, Sound Of Yell and Sacred Paws, the latter signed to Mogwai's own Rock Action Records label.

Public Enemy rewrote the rules of hip-hop, becoming the most influential and controversial rap group of the late '80s and beyond, and, for many, the definitive rap group of all time. To list all their achievements would be a near impossible task, but rest assured their 27 June Roundhouse show will span three decades of agenda-setting politically aware hip-hop all the way from 1987's Def Jam debut Yo! Bum Rush the Show to 2012's The Evil Empire of Everything, with the group, led by the firebrand Chuck D and livewire Flavor Flav, an irresistible live force.

It's been seven years since GZA has released a solo album, but with the eagerly anticipated Dark Matter due this year, his 28 June Roundhouse show promises to be something truly special. The founding member of Wu-Tang Clan and author of the unparalleled Liquid Swords amongst others, sits atop the most "fucking amazing" (according to Mogwai's Stuart Braithwaite), genre-defying bill of the season, with Chicago's hugely influential Tortoise rubbing shoulders with Loop, Lightning Bolt and Mugstar on an epic line-up.

Like Mogwai and many others on the bill, Canadian post-rock giants Godspeed You! Black Emperor have a history with ATP, having returned from a seven-year hiatus in December 2010 to curate and performed at Nightmare Before Christmas. They will use their 30 June Roundhouse show to debut forthcoming album Asunder, Sweet and Other Distress, alongside an enviable arsenal of bona fide genre classics; support comes from Beak>, the Bristol-based trio consisting of Geoff Barrow (Portishead), Billy Fuller (Fuzz Against Junk) and Matt Williams (Team Brick).

In a year of significant anniversaries, The Jesus & Mary Chain mark three decades since the release of their seminal debut Psychocandy. Their Roundhouse show on 5 July will see them perform the album in full in London for only the second time since their reformation, with support from Bardo Pond.

The Roundhouse shows mark 20 years to the week that Mogwai met in the Glasgow living room of Stuart Braithwaite's parents to rehearse together for the first time. The band formed in Glasgow in 1995 and released their debut long-player Mogwai Young Team in 1997. A constant stream of critically acclaimed albums and EPs followed and, in 2013, the band's soundtrack to acclaimed French drama Les Revenants kicked open the doors to a new wave of listeners. A third decade sees Mogwai a band in the ascendancy. Last year's critically acclaimed eighth album Rave Tapes was their first to crack the top 10, and yielded a worldwide sell out tour, including the Sydney opera House and two shows at London's Royal Festival Hall. The summer saw a comprehensive deluxe edition of their seminal 1999 album Come On Die Young via Chemikal Underground and headline sets on stages at Glastonbury and Latitude, amongst others, before the latest in their career-spanning set of stunning EPs, Music Industry 3. Fitness Industry 1, closed out the year. 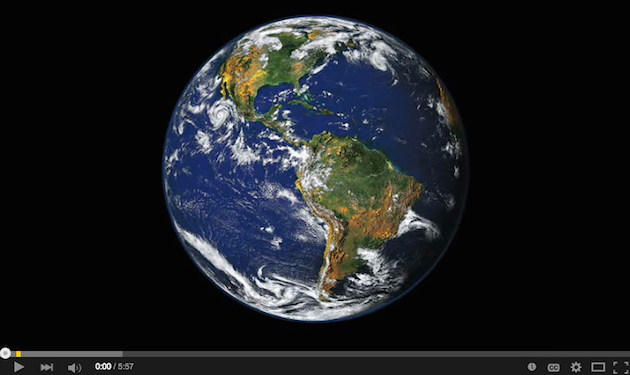 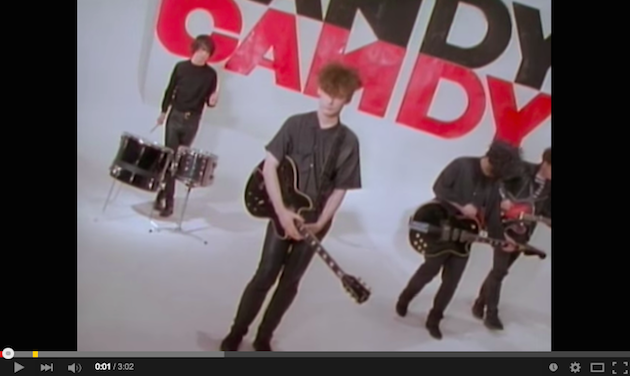