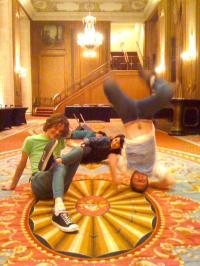 Satomi Matsuzaki plays bass and sings, Greg Saunier plays drums, John Dieterich and Ed Rodriguez play guitars. But what is Deerhoof really? Hell if we know. Pitchfork went so far as to label Deerhoof as "the best band in the world." The New York Times described them as "one of the most original rock bands to have come along in the last decade." From their humble beginnings as an obscure San Francisco noise act, they've become one of indie music's most influential bands with their ecstatic and unruly take on pop. Deerhoof has released 11 self-produced albums and continues to tour the world frequently. The members of Deerhoof are Satomi Matsuzaki, John Dieterich, Ed Rodriguez and Greg Saunier.

Deerhoof reveal 'Flower', the video for the latest track to be taken from the album Breakup Song - and announce March tour dates for Europe - On sale now!

ATP Recordings are excited to announce UK dates from Deerhoof in support of their stunning latest album Breakup Song...

ATP Recordings artists and one of the most phenomenal live bands around DEERHOOF have been personally picked by Yoko Ono to appear at her edition of the Meltdown festival at London's South Bank Centre this June...

Behold a Marvel in the Darkness